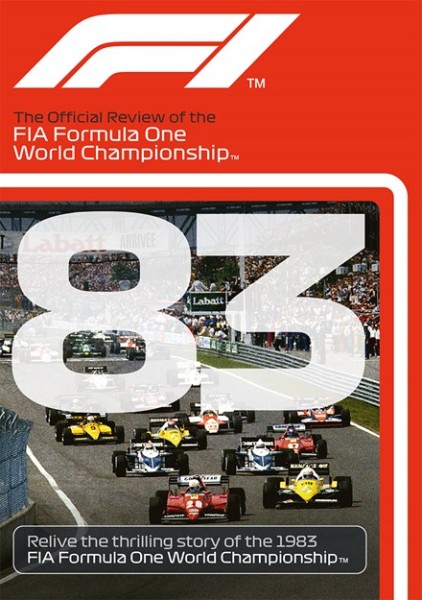 Description Evaluations 0
Description
After previous seasons punctuated by controversy and boycotts, the focus in 1983 returned to... more
Close menu
F1 1983 – The Official Review of the FIA Formula One World Championship

After previous seasons punctuated by controversy and boycotts, the focus in 1983 returned to what was happening on the track with the emphasis on turbos, tyres and spectacularly quick pit stops. Foremost amongst the drivers were Nelson Piquet, Alain Prost, Patrick Tambay and René Arnoux.

The main change for the season was the complete ban on ground effect aerodynamics, with a mandatory flat undertray introduced to limit the downforce. As turbos increased the available power, teams struggled to find a working formula to make cars driveable as well as fast.

Nevertheless Nelson Piquet and Brabham-BMW became the first to win with a turbocharged engine, setting the trend that was to continue until the turbo ban.

With a quirky commentary, all the drama, action and spectacle is condensed into one breathtaking review package.