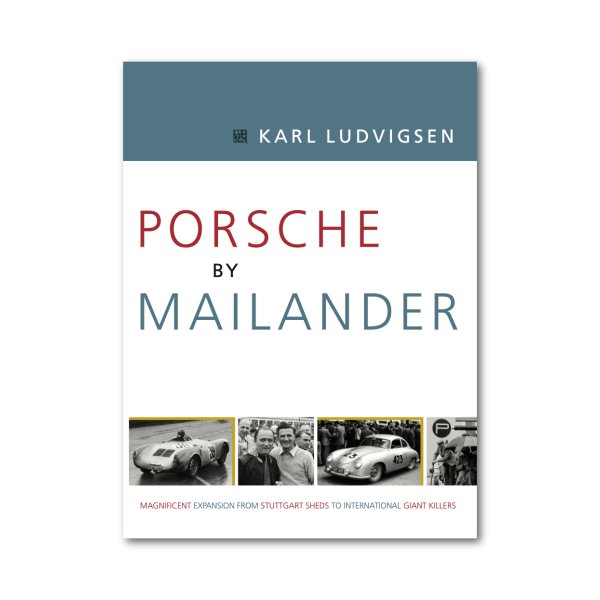 This product is currently not available.
Please inform me as soon as the product is available again.
€138.00 *

Description Evaluations 0
Description
Among the many holdings of the Ludvigsen Library are the works of Rodolfo Mailander, who... more
Close menu
Porsche by Mailander

Among the many holdings of the Ludvigsen Library are the works of Rodolfo Mailander, who photographed races, motor shows, new-car introduction and other events in Europe from 1950 through 1955. This handsome portrait-format book presents Mailander’s photography, selected and with commentary by Karl Ludvigsen, of Porsche cars and people through these years.

In a scant six years from 1950 through 1955 Porsche transformed itself from a back-woods builder of Beetle-based specials to a giant-killing racing powerhouse on the world’s great circuits and an esteemed manufacturer of fine sports cars. One man, Rodolfo Mailander, was on the scene with his Leica, capturing for all time the men, machinery and moments of this astonishing ascent to fame and success. For this sumptuous book Dalton Watson asked Mailander’s life-long friend, Karl Ludvigsen, to choose and comment on the most illustrative and evocative images from the photojournalist’s oeuvre. Prize-winning author Ludvigsen, one of the world’s great Porsche experts, also limns Porsche’s decade-by-decade progress toward eminence. In Simon Loxley’s superb design the images, reproduced in a rich four-colour process, depict Porsche people and products at the circuits of Le Mans, Monte Carlo, Monza, Bern, Reims and the salons of Paris, Geneva, Turin and Frankfurt en route to immortality. Immensely satisfying as a work of art as well as an unique record of the genesis of an iconic marque, this volume will be prized by all admirers of automotive excellence.

Over 250 pages, this book presents some 300 images of the world of Porsche in the first half of the Fifties as seen through the lenses of a man who was intimately involved with this world. By far the majority of these photographs have never before been published. Karl Ludvigsen provides a knowledgeable and entertaining commentary on each, together with a year-by-year overview of the activities of Porsche during these dramatic early years.

The early Fifties were the dramatic formative years of Porsche, which was founded as a sports-car producer in 1948. The first-ever Porsche car scored a race victory that same year. Porsche’s first effort at Le Mans in 1951 brought a class victory, and Le Mans was destined to remain a major target for Porsche’s racers in the future. With the arrival of the fabled 550 Spyders in 1953 Porsche scored class victories on all continents with such drivers as Stirling Moss, Hans Herrmann and Richard von Frankenberg. As well, during these years Porsche developed and expanded its range of exciting sports cars for the road.

Included in the book are: