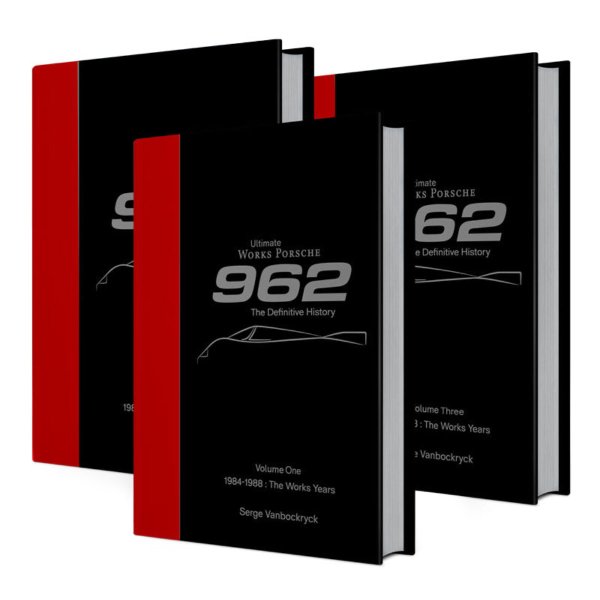 Quarter-bound in red leather, the black fabric-covered hardback limited edition of Ultimate Works Porsche 962 features silver foil script and is presented in a black fabric bound slipcase. The print run has been limited to 962 numbered copies.

The Porsche 962, created in 1984, was the successor to the all-conquering Group C-specification Porsche 956 of 1982, but also very much the result of Porsche adapting its successful Group C car to the needs and regulations of the US-based IMSA GTP Championship.

The 962 proceeded to obliterate the competition on both sides of the Atlantic, making it the most successful purpose-built race car in automotive history.

This three-volume book outlines in unprecedented detail the ten-year career of the works Porsche 962s and 962Cs, built and entered by the Weissach-based factory team run by Peter Falk and Norbert Singer, and driven to multiple victories by the likes of Jacky Ickx, Derek Bell, Jochen Mass, Hans-Joachim Stuck, Al Holbert, Hurley Haywood and many others.